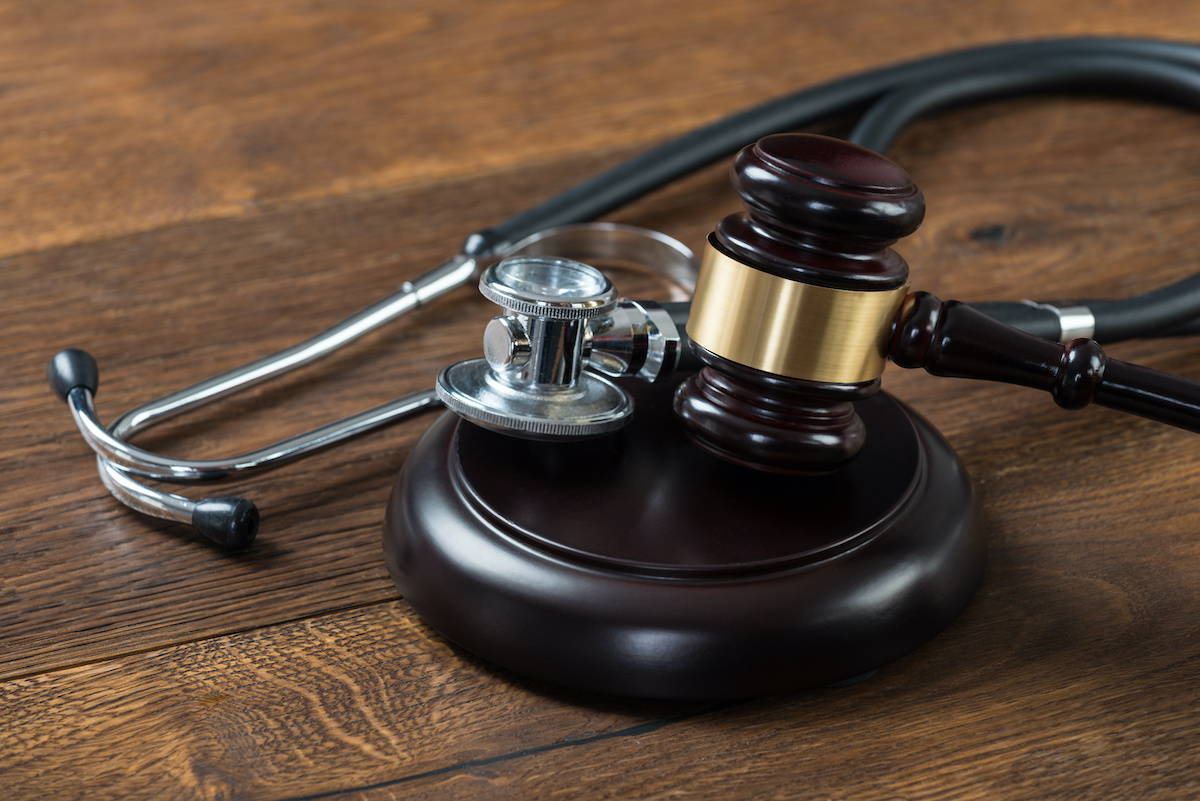 Amy Gunn of the Simon Law Firm requested $9.8M in her closing argument, but the jury’s verdict for the Plaintiff was $10M.  Her client, Kelvin Frazier, had been suffering from neck, arm and hand pain back in 2016. After Dr. Thomas Lee operated on him in January 2018, he experienced weakness and loss of strength in both legs and arms and now needs to use a wheelchair and a walker. Dr. Lee had performed this surgery, a C5-6 and C6-7 anterior cervical diskectomy and fusion. Amy argued that the doctor negligently contused the spinal cord, whereas the doctor argued that damages were caused by an unavoidable bleed in the spinal canal.  Amy and her co-hosts discussed this case on episodes 406 and 407 of their podcast, Heels in the Courtroom. Amy tried this case along with Pat McPhail, also an attorney at the Simon Law Firm.  Here are a few excerpts from these two podcast episodes:

My clients are tremendously wonderful, a deserving couple. The husband went to a orthopedic spine surgeon–this was in July of 2017–with some neck pain and some left arm, numbness and weakness. It was determined that he needed a two-level fusion and discectomy in his neck. That surgery occurred on January 31st, 2018 at a local hospital. It was our theory that the surgeon, while using an instrument to remove some bone spurs from the spinal canal, contused or bruised, or sometimes known as “thumped,” the spinal cord, leaving my client with left-sided weakness, both in his arm and his leg and rendering him for all intents and purposes, unable to walk and wheelchair-bound.

The spine surgeon said that he didn’t do that. He claimed that a contusion of the cord didn’t happen. Which of these two ways did my client’s spinal cord become injured? Was it what we said, that the surgical instrument contused the cord? Or was it what the doctor said, which was that there was a bleed in the spinal canal area called an epidural hematoma that occurred sometime. He couldn’t say when it occurred during the surgery as he was continuing to perform it, but he didn’t see it. He completed the surgery.

As my client was waking up in the recovery room, he was unable to move any of his limbs, neither his arms nor his legs. The surgeon observed my client for about three or four hours, gave him some steroids, which are typically used to reduce any inflammation that could be causing the neurologic deficits and took him back to surgery about four hours after the first one was complete. He did not order any imaging between surgery one and surgery two which, without question, is the gold standard to determine whether an epidural hematoma was actually forming because you could see the blood. He didn’t request that, didn’t order that. Instead he took my client back to surgery, opening him back up and recorded an epidural hematoma at the C6-7 level, which was one of the levels that he had worked on previously. He claimed that it was pushing the spinal cord.  My client continued to have left-sided weakness. The doctor claimed that it was this epidural hematoma and that if there’s a slow bleed, even in a confined space, such as the spinal canal, it’s going to take time before that pressure builds up and causes compression on the cord that manifests itself in neurologic deficits and weakness or sensory loss in your limbs.

So I researched the hell out of epidural hematomas and learned that it should be no surprise that blood, like water, follows the path of least resistance. Your spinal cord is untethered in your spinal canal. So if you have a bleed within the epidural space, it should traverse more than one level. It should really flow up and down the cord. It doesn’t stay in one spot. Why would it stay at the C6 level and not go up or down that never made any sense to me? Moreover, it encompasses or surrounds the cord because again, it’s not in a confined space. So why was it only on the left side, according to the surgeon. Why was there one blood clot on the left side of the cord at C6 seven, pushing the cord over by a third? I researched and I just couldn’t understand it.

And guess what? It’s not true. It didn’t happen the way the surgeon claimed it did. And so then I went through all the records. I asked what is the evidence other than the surgeon’s own operative report, that there was an epidural hematoma? I mentioned to the jury that he didn’t order any imaging between the first surgery and the second surgery, so there’s no evidence of imaging. There are quite a few references as you look through the records to the epidural hematoma, but they were all cut and paste diagnoses from the surgeon’s operative report.

I conferred with my experts: Is this a thing? I learned that epidural hematomas can cause neurologic deficit, but only in the manner that I’ve described, it takes time to build up pressure. They’re never in one little spot. My expert concluded: no, [the defendant’s theory] is not a thing.

Prior to the Surgery

About six months earlier, this same surgeon had an episode in the Operating Room with a different patient where he had, I think, what we’re agreeing to call a mental breakdown. And during that surgery, he was talking inappropriately, asking to be taken to the mothership and other things indicative of truly a mental break. He was escorted from the OR, took a four-month leave of absence and returned to the operating room at the end of November in 2017, about two months before my client’s surgery.

As discussed on the podcast, there were numerous issues regarding a legal theory plaintiff raised against the hospital for negligent credentialing.  This podcast discussion regarding credentialling interweaves with a discussion about recent changes in Missouri law based on the theory of whether a doctor can be characterized as an agent of the hospital.  In these two podcasts, Amy also discusses how her investigation and research eliminated the doctor’s theory for how the injury occurred, involving difficulty obtaining EMG records and expert testimony.

You are invited to listen to these conversations at Heels in the Courtroom, Episodes 406 and 407.

EP515 – Working While On Vacation